Before he passed away, Mike LeDoux shared an intriguing Optigan® story with me, which I was reminded of this week in light of everything that’s going on with our current president. He pulled out these office memos and had me read them. 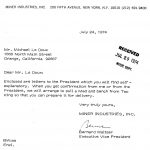 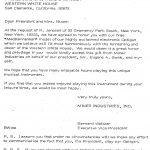 Astute students of history will note that at the time these memos were written, Nixon was actually in the process of being impeached, and would resign just a couple of weeks later. You’d think there would be more pressing matters at hand than receiving the gift of an Optigan® at the Western White House?

I don’t remember all the details of Mike’s story, because he never put it in writing, but apparently Mike was known by someone associated with Nixon as a skilled audio tape editor, and given the Optigan® office’s fairly close proximity to the Western White House, he was recruited to consult on a possible editing job of the famous “smoking gun” tapes that ultimately did Nixon in. Delivering an Optigan® to the Western White House was simply the pretext for Mike’s visit. Here’s where my memory of Mike’s story gets a little blurry. I seem to recall that the Optigan® was, in fact, delivered, but things were moving so quickly that by that time nothing could be done to prevent the impact of the tapes, and ultimately Mike never touched them. So that’s pretty much all I know and remember. I won’t venture to speculate further on this story, but rest assured that we won’t be sending any Optigans down to Mar-A-Lago (or editing any audio for the White House)! 🙂

After David Van Koevering passed away, our good friend Brian Kehew had an opportunity to r

NEW Optiganally Yours Song – WHOMEVER WATCHES YOU SLEEP

The first track from the new Optiganally Yours album “O.Y. in Hi-Fi” has been released! ht

I always wondered why my Optigan® was in all white, it must have come from the White House.

What happened to the price of Optigan® merchandise on eBay? Everything Tanked! I remember spending $100+ for one record. Now they are 10 bucks. What happened?