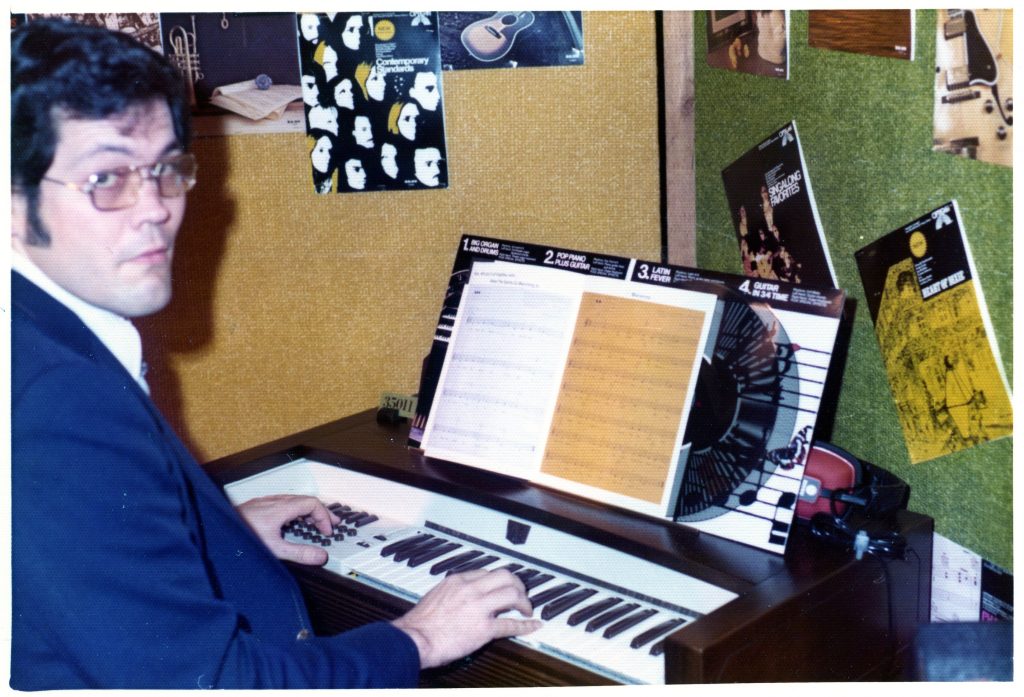 Mike LeDoux A couple of years ago I received an out-of-the-blue email from a guy named Mike LeDoux who claimed that he had seen my website and suggested I give him a call because he had been Optigan’s “Musical Director,” and had been responsible for making all of the discs. Needless to say, I was at first skeptical of this claim, but later that evening when I had Mike on the phone, all my doubts disappeared. Mike was a very friendly guy, and was totally forthcoming with all sorts of information about how the discs were made, who played on them, the scoop on the Mattel/Miner switchoff and endless other bits of trivia. Luckily for me, Mike was a relatively young guy in his 20’s during his 6-year stint with Optigan, so he’s not too old now to remember many of the picky details I tend to grill him about!

Conveniently, Mike turned out to live only about 1.5 hours up the coast from me in Fountain Valley, CA. When I finally got a chance to meet him, he rewarded me with more information and artifacts than I could ever desire. Topping the list, of course, is the complete set of master reels containing all of the studio recordings of the Optigan material!!! This is a gargantuan archive of about 40 hours worth of material, most of which never actually saw the light of day as official Optigan discs. Mike very generously donated these tapes to my cause- a deed which will forever qualify him as the Supreme Demigod of All Things Optigan. The fact that he still had the master tapes pretty much made up for the frustrating fact that approximately 6 months before he found my website, he dumped (yes- at the dump!!) his entire set of discs in a mad cleaning spree. Another 6 months and those tapes probably would have gone next. But he did still retain two complete and pristine sets of songbooks, one of which he also donated to my cause. Mike also shared with me a photoessay he had put together in a notebook detailing the step-by-step process of creating an Optigan disc, and was dutifully amazed that I would be interested in such arcana!!

While he spent the 60’s becoming an accomplished guitarist and radio DJ, Mike started out at Optigan as, essentially, a sound engineer. He came to this job by way of his previous involvement with Mattel’s talking Barbie line of toys. While he was not brought in at the very beginning of R&D, he eventually became responsible for perfecting the Optigan disc design and execution. In fact, apart from a few experimental prototypes made before he was hired on, Mike is responsible for every single disc that ever rolled off the assembly line. He was the only guy ever to operate the complex disc making machinery, which was custom-built for Optigan by Westrex Corporation.

When Mattel decided to sell the Optigan to Miner Industries in 1973, Mike was the only core employee which was kept on. Without Mike, Miner would not have the ability to create new discs. With this in mind, Mike used his position of power to insist that his office be kept on the west coast, while the rest of the factory and stock moved to New Kensington, PA. He struck up a deal with Circuit Design & Photography (the company which, up to that point, had been Optigan’s primary vendor for disc duplicates) to take up office in one of their empty backrooms, and there he stayed for the next 3 years. The operation became much more streamlined, as the mastering lab and duplication/assembly line were now conveniently located under one roof.

Unfortunately, Optigan did not come to a happy end for Mike. Along with Optigan, Miner Industries also owned and operated the subsidiary of Magnus Organs. Magnus also had an office on the west coast, and over the years this office and it’s employees had sunk to disastrous levels of inefficiency and corruption. As Mike was the only “sane” Miner employee on the west coast, he was essentially coerced into taking care of the problems which had cropped up over at Magnus. To make a long story short, Mike essentially was put in charge of shutting down the Magnus Office, a task which was to occupy him for most of 1976. While Optigan continued sparse production during this period, for all practical purposes Mike’s “battle” with Magnus marked the end of Optigan.