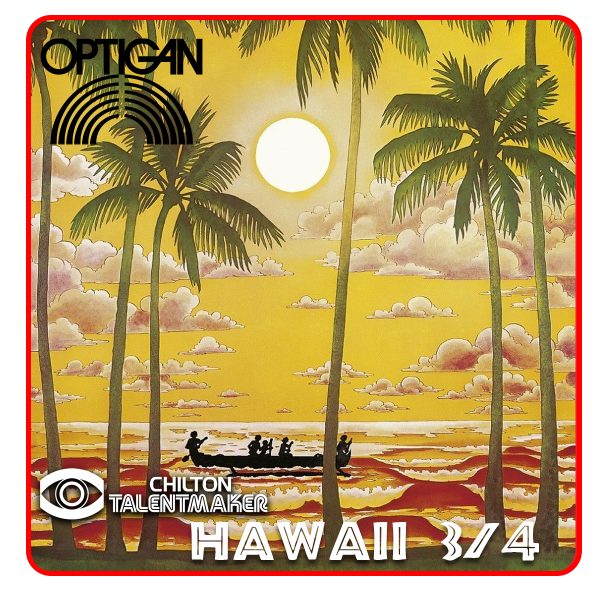 This title has been made available in response to requests for the sounds of the Chilton Talentmaker ported to Optigan discs. These are not simply direct copies of Talentmaker discs, rather we’ve taken the Talentmaker sounds and put them on Optigan discs.

Some technical notes: Unlike the Optigan, the fate of the Talentmaker’s original studio master tapes is unknown. In all likelihood, they were discarded long ago and are currently rotting away in a landfill somewhere. As such, the only way to get these sounds onto Optigan discs was to simply get the best quality recordings of the original Talentmaker discs that we could manage, and then transfer those recordings to Optigan disc format in the same way we master all of our Optigan discs. Since the Optigan master tapes have keyboard scale recordings very similar to the scales on the Talentmaker discs, we decided to use those instead of recordings from the original Talentmaker discs. But the SFX tabs and chord buttons are all directly recorded from the Talentmaker. Also, since Talentmaker discs have four chords not available on the Optigan (Ebmaj, Ebmin, true Amaj, true Emaj), a compromise had to be made in order to fit the most “useful” of these chords onto the Optigan disc format. First, we managed to keep the Ebmaj chord by putting it on the Optigan’s SFX tab #5 (the Talentmaker only has four SFX tabs). We had no place to put the Ebmin chord, so that had to be discarded. Also, we decided to place the Amaj and Emaj chords on the Optigan’s Amaj and Emaj buttons, though this also means sacrificing two of the Talentmaker’s diminished chords. In other words, you’ll get true A and E major chords, but these same chords will also appear on most of the dim chord buttons, rendering those buttons essentially useless. The only true dim chord left available is on the C/A dim buttons.